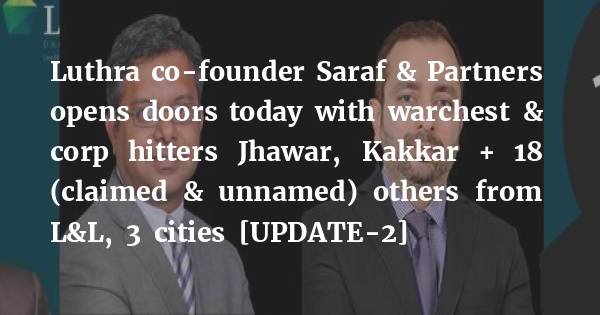 L&L Partners co-founder and former senior partner Mohit Saraf, who had won a Rs 77 crore-value settlement in a protracted arbitration and Delhi high court dispute and separation with fellow co-founder Rajiv Luthra, will announce the setting up of his own rival firm today, we understand according to multiple market sources.

Saraf’s firm will be called Saraf & Partners, and will include at least two of L&L’s few remaining corporate heavy-hitting long-time corporate partners, Bikash Jhawar and Vaibhav Kakkar, according to two authoritative sources. Jhawar, a 2003 NLSIU Bangalore graduate had been with the firm since 2007 after leaving ICICI Bank, while Kakkar, had worked at the firm since graduating from NLU Jodhpur in 2006.

According to our league tables, both of those names have been the highest-profile and busiest in L&L’s remaining corporate practice, with Jhawar having acted in 2019-20 on 7 deals worth $4bn, including a number of huge insolvencies; Kakkar having led on nine deals worth $208m that year, including often with the firm’s late senior corporate partner Sundeep Dudeja.

Those two have been some of the most hotly tipped and, according to some of the transcripts of internal firm discussions submitted in court, also vocal supporters of Saraf’s vision of opening up the equity of the firm in a different manner from Rajiv Luthra’s.

However, we believe that other L&L partners will also be joining, we have not been able to authoritatively at this time confirm the other names that will be part of the Saraf & Partners starting line-up, but will update this story when we hear more.

We have reached out to Saraf, Jhawar and Kakkar for comment but neither have responded.

We have also reached out to Luthra for comment.

Update 13:33: The new firm has sent out a press release, stating that the firm would have 21 partners “who have resigned from L&L” and a total of 84 lawyers (though it does not list the partners). The (nearly) full press release included below.

Update 12:41: As pointed out in the comments, Saraf and Partners also has a logo, Twitter account and registered domain (linked to from Twitter but only with a holding page now) now.

But for the name, the fact of Saraf & Partners starting will surprise very few people in the market, which has witnessed the break-up of the firm since we had first begun reporting bitter and very open internal fights in late 2020.

Since then, at least seven partners – including many of whom were homegrown at the firm – had quit the firm, in addition to mass departures such as nearly the entire top-rated capital markets team previously to IndusLaw.

That said, despite the heavy attrition and losses of talent that he might have hoped to entice into his new endeavour, he does start out with a warchest of Rs 52 crores in cash from Rajiv Luthra after the litigation, and a bank guarantee of Rs 25 cr from the latter pending the final outcome of the arbitration.

Luthra down in numbers but not out

These include the re-joining of AZB & Partners Mumbai-based banking partner Piyush Mishra into L&L’s depleted Mumbai office and insolvency team, according to Bar & Bench (the NLSIU 2002 graduate had left L&L in 2007 and 2015 after three and near-six-year stints respectively, bracketed and interposed by roles at erstwhile Amarchand Mangaldas, Allen & Overy and Cyril Amarchand after moving to AZB in 2018). Bar & Bench also reported that L&L was looking to expand its office space to entire 20th floor of an Indiabulls building, though we have not been able to confirm precise details.

Another Luthra alum, Abhishek Mathur, would also be rejoining L&L in Delhi, according to B&B. Mathur had been running ABM Law Associates his own firm since leaving Luthra & Luthra, as it was then called, in 2008 after having begun his career at Luthra’s in 2003 after graduating from NLSIU.

We also understand that in the latter stages of the dispute, at least since May 2021, Rajiv Luthra had hired the 2016 to April 2021 Trilegal chief-operating officer, Sabiana Anandaraj, as part of his personal team to help him in managing the firm.

The hire makes sense, as of course, managing the firm on an operational level had previously effectively been Saraf’s role, despite Saraf’s prior official job title having been senior partner and Luthra’s that of managing partner, which Luthra retains at the continuing L&L firm.

We have not been able to confirm Anandaraj’s official title at L&L.

The Luthra & Luthra of the future

What exactly the future structure of L&L will be, is not clear.

For one, negotiations to extricate Saraf from the separate litigation and other partnership he has a stake in, are presumably still ongoing and were not included in the Delhi high-court sanctioned settlement.

What is known, is that during the midst of the dispute, Luthra had infamously ousted Saraf and opened up a side pot of equity, appointing two partners – Delhi-based Harish Kumar and Mumbai-based Aniket Sengupta – into this new equity pot.

We understand that the exact percentage of his equity that Luthra had opened up at the time was equivalent to 0.25% of Luthra’s 66.6% profit share at the corporate partnership firm (Luthra had not responded for comment to this figure back in January 2021).

If that figure is correct, and if taking a high-point profit of Rs 43 crore at the corporate firm, according to claims that had been made by Saraf, that would equate to around Rs 7 lakh of annual equity profits available for distribution to equity partners other than Luthra (and Saraf, back then).

Presumably Luthra has been busy trying to come up with a more workable equity model since then – since it was the most public bone of contention that finally led to the fundamental disagreement between the two – though no firm announcement or commitment has yet been made internally.

Likewise, the equity structure of Saraf’s firm is not yet known either.

Update 13:33: The firm has issued a press release with more information (though it’s still silent on the other partners):

This marks the beginning of a new initiative by Mr. Saraf, who had previously been the co-founder at M/s L&L Partners (earlier Luthra & Luthra Law Offices) (“L&L”) – one of the leading corporate law Firms in India.,

Saraf and Partners shall at inception, comprise of 21 Partners and total strength of little under 100. The members of the Firm have extensive experience practising law at the highest levels with its partners all being leaders in their respective fields, Individually and collectively. The lawyers comprising the Firm have been recognized for their excellence by clients, industry bodies and their peers – and are drawn from a variety of backgrounds so as to ensure an optimal client experience.

Sharing his views about the new firm, Mr. Mohit Saraf, Founder & Managing Partner said, “The Legal industry is evolving at a tremendous pace, making it crucial for Indian law firms to reinvent, advance, and adapt themselves to these changing times. While the split from L&L was a major contributor to the inception of Saraf & Partners, one of the core values being offered by this firm is the modern ideology and inclusiveness in the management of clients and business partners. Our mantra is to build an institution where everyone feels a sense of belongingness and loyalty towards the firm. With Saraf & Partners, we are striving to transform the legal landscape with a new-age, innovation-led and vision-oriented firm which is ahead of its competition in the market. Each of the 21 partners are leaders in their areas of competency and are also the owners of the Firm, and will have a big role in managing the Firm. This is the beginning of a new era and we are excited to see where this journey leads us in future.”

The Firm intends to provide its full-service legal capabilities to its existing and potential clients and offer specialization in the areas of [mergers and acquisitions, restructuring, PE & VC investments, banking and finance, insolvency & bankruptcy, IPR & Tax. as well as corporate disputes]. The Firm will aim to bring a strategic approach to client needs combining sectoral knowledge and legal experience.

Elaborating further on the new firm, Mr. Saraf said, “What makes the Firm even more distinct is its commitment to rewarding excellence and its entrepreneurial and strategic approach to growth. At inception, only a third of the Firm’s equity shall be held by me – with another third being held by the various leading partners who shall be transitioning to join the Firm. A further third of the equity of the Firm has been earmarked for the talent acquisition process that the Firm shall soon be taking up to expand – ensuring that the best and the brightest lawyers are both incentivized to join, and feel part of, the structure of the Firm. This model of minority ownership will go hand in hand with a participative and broad based management system – giving the lawyers and counsels space to grow as professionals and incentivizing performance in a sustained structure.”

It has to be noted that L&L had been a two-partner partnership firm that had been operated by Mohit Saraf (“MS”) in collaboration with Rajiv Luthra (“RL”). Saraf and Partners came into existence after over time numerous differences had arisen between MS and RL in respect sharing of ownership of the Firm with younger partners. This resulted in RKL illegally expelling MS from the partnership and was the subject of litigation between the two partners before Hon’ble Delhi High Court. The Hon’ble Delhi High Court in January 2021 – had ruled in favour of MS. In an appeal, the parties, in the interest of all the clients, attorneys and staff associated with the practice, decided to agree to separate – on terms of settlement which were recorded by the Hon’ble Delhi High Court (Division Bench) through its orders.

Pursuant to the orders of the Hon’ble Delhi High Court, MS has now been empowered to set up his own independent law practice, including in partnership with any lawyer/ advocate who was part of L&L Partners. MS and RL are entitled to claim credit for all works done and accolades won by the L&L, as well as compete for its clients, work, advocates, and staff. Hon’ble Delhi HC order has provided choice to each and every client, lawyer and staff to either join the Firm led by Mohit Saraf or Rajiv Luthra.

The entity controlled by RL has been permitted to use the brand name L&L Partners or “Luthra & Luthra Law Offices, sybject to contractual settlement. Accordingly, a separate entity, branded Saraf And Partners has been established by MS, and a large part of the current strength of 84 includes 21 partners who have resigned from L&L Partners and are accordingly moving to Saraf and Partners.

The Firm will operate out of its new office locations starting today and may be contacted at the below coordinates: